This is part 2 of Poverty vs. Wealth Mindset

This is a paradigm I am just barely starting to examine, and so far I’d have to say… FASCINATING!

The first episode of Paradigm Swap. Everything prior to this entry is former podcasts, posts, and ideas that I didn’t stick with…

In some way or other, we’re all looking for the answers to the secrets of the universe. It’s the unending quest of the infinitely curious human species.

But sometimes in our quest for that destination that is the answer to our question, we lose sight of the fact that it’s our journey for the answer that provides the greatest insights. The quest itself carries more illumination than just the answer we sought.

This piece came to me after several agonizing months doing nothing with music.

I understand the concept of the tortured artist, because I’ve lived it. The constant struggle for acceptance and success takes it’s toll when living your dream always feels just barely out of reach. I once heard a quote that got me thinking about this, and it was in the spirit of this idea that I got out my equipment, dusted it off, and composed this music.

“You must learn to walk to the edge of the light, and then a few steps into the darkness; then the light will appear and show the way before you.” —Harold B. Lee

He’s right, of course. But sometimes the appearing light doesn’t come immediately. Sometimes it doesn’t even come a short or even long time later. Sometimes we need to walk in the darkness for a long time before the light appears.

Some become bitter. Others panic. But the truly courageous hold to the journey, not because they can see, but because it’s right. And because they continue to walk, they gain something far greater than light. They gain faith—real, lasting, unquenchable faith. To those that hold to this perilous journey, no darkness can stop them. Even as they stumble, they make it through. And they find and help others along the way. They lift, and they lead, and they strengthen, and they build that faith in others.

In essence, they become a light to others, even while their own vision is obscured. But they’re not the blind leading the blind. They have vision beyond what light can offer.

Don’t fear the dark. It is there to make light out of you. 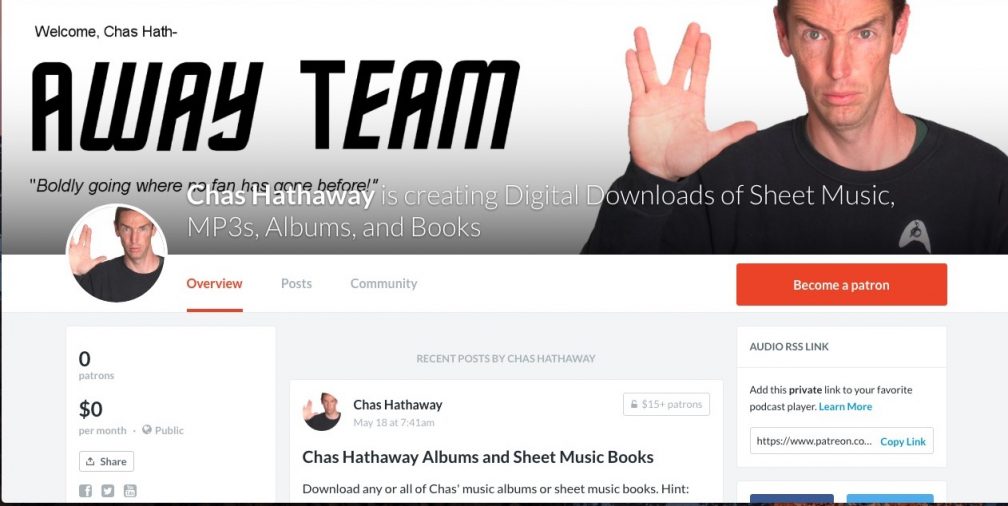 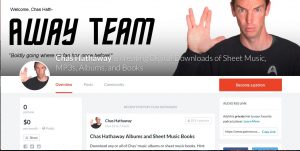 I’ve always kind of liked the idea of Patreon, where people contribute monthly “pledges” to the artists they really like, and as a thank you, the artist sends the patrons cool stuff, inside gigs, and basically gives them a chance to be a little more geek-fan than those who don’t contribute.

But I’ve never felt like it was a good idea for me personally. I’m fairly inconsistent in my production–sometimes I’ll go three months without releasing anything, and then I’ll release three sheet music pieces, five MP3s, and a new album in the fourth month. Not much motivation for the contributor for the three months preceding the big month. So I didn’t sign up.

One thing I did have going for me is that I have a lot of products: several sheet music books, a handful of fiction/nonfiction books, dozens of sheet music pieces, and hundreds of MP3s.

So one day I thought of an idea (having nothing to do with Patreon) of making a monthly subscription service available that would allow subscribers to have complete access to every digital download. The more I thought about it, the more I liked it. And as I researched how to set it up, I realized Patreon is structured in such a way that it would be extremely simple.

So I did it. And I’m calling contributors (or subscribers, if you prefer) members of the Away Team (get it? Chas Hath-away team… clever, eh? Ahem…), and just for fun, I use a photo of me in my Vulcan face.

I know, I’m not using Patreon in it’s intended way, but it’s not too far off. Basically, you contribute $15/month, and as a reward/thanks, you are granted access to ALL digital downloads from ChasHathaway.com–including sheet music, MP3s, books (both fiction and nonfiction), albums, and yes, even the sheet music books, some of which cost more than $15.

Once you sign up, you’ll be given access to the Away Team page, which looks like a blog with several blog entries. Each entry has a pile of files (Sheet Music entry, MP3s entry, etc), which can be downloaded by a simple click.

I think this could be a really great thing for both of us. For me, it provides a small but steady stream of income (I hope), and for you, it provides all the sheet music, MP3s, albums, and books I’ve ever written. And as I come up with new stuff, I’ll immediately add them. Plus I’ll include some projects I haven’t released yet–just because I love you guys. 🙂

If you can’t find something, or there is a product you know exists, but is not listed, PLEASE let me know! I hate to promise people stuff and not deliver! I want it all available to you.

What does GMO mean? Is it the same as hybrid species? What are heirloom seeds/plants, and what is the difference between the three?

I had another dream this morning around 8am where I was presented (again, without any real context—the idea just “occurred” to me, if you will) with an idea.

In this case, it was the idea that there are two levels of agency. The first level is the basic level that we all have—the capacity to choose our attitudes about our circumstances, and then work within our circumstances to make things work out for the best. This is the level that most people live out their lives in. This is where the real test of mortality takes place, where we show our Father in Heaven that we are willing to do all things whatsoever He commands us.

But there is a second level of agency. It is the level where a person rises above his/her circumstances. It’s the level that makes the great leaders, reformers, entrepreneurs, inventors, as well as the tyrants, Hitlers, and manipulative and wildly successful salesmen.

This second level of agency isn’t limited to circumstances, but can actually bring about significant changes to circumstances. It’s available to all, though it will manifest itself very differently in every person who chooses to use it.

So what is the difference between those who live entirely in first level agency and those who develop and live in second level agency? That’s what we discuss in this program.

I had a dream last night where I was given an interesting idea for an experiment. The idea was given without the context of a situation–I didn’t see the experiment taking place, and I don’t even remember being in any particular situation. But I was asleep, and this idea came to me.